Our expedition to Shetland – Fair Isle – Orkney, has become a shortened ferry crossing to Kirkwall in Orkney only, due to the predicted high winds and no diving in Shetland. Our intrepid leader, Richard managed to get us a refund on the ferry and organise taxis waiting at Kirkwall at 11.00 pm on a Saturday night (fortunately given the extreme distance between ferry terminal and harbour).
There was no sign of the poor weather as we set out for Kirkwall on the ferry enjoying a beautiful sail and sunset. Given the late change of plans and Bob’s steam down from Shetland on Friday night / Sat am the diving plans were up in the air. Then there was the midnight kit load and set up.

A late first dive next day became a scenic one against a rocky wall. Plenty of big gullies and 3 octopus spotted hiding in the rocky holes. A nice shakedown, given many of the group had not done much diving – July St Abbs having been cancelled due to bad weather. Great reviving lunch of leek and potato plus blue cheese soup given the swimming against the current which was running reasonable strongly.
Wreck of the Cotavia, 2nd up late in the afternoon. Deep but great viz with huge boilers and a plate stood upright against the block. Lots of life but just not enough time. On the surface some of us had to swim hard back to the boat. Our DO, Matt, opted to take to his bed due to the excessive exercise at his advance age ! A long and slightly lumpy steam round the islands to get into the relative shelter of the flow at Lyness at 10.00 pm. A quiet night with everybody up and at it for the 9.00am appointment with the Koln. 36m to the bottom, lying on it’s starboard side relatively intact for the cruisers. Most opted for the bow excursion.
A delicious lunch of sweet potato soup with a suitable digestion interval led to 2.00pm at the Brummer. Slightly better viz but the lighter built ship has ‘dropped’ more that her cousin. Several saw two seals both from the wreck and the shot line. Diane tried knitting with lion’s mane tendrils on the shot line as it appeared out of the mass of bubbles from the mass of divers on the shot line. Richard and Frankie were nothing like as creative and were merely stung.
It being Frankie’s birthday we were treated to an impromptu cake and candles for dessert after the delicious pork and cider casserole. Frankie did manage to blow out all 44 candles and wished to go to the pub in Stromness. It did come true !!
A fine morning and off to the Dresden. A little more canted over and top plates dropping but still enjoyable with features and guns a little clearer. Lots of shoaling fish and a few more lion’s manes near the shot. Into Lyness (Hoy) for a little walk to the naval cemetery and tea (best china for a change) and scones at the museum. A short trip over to the F2 and Barge. F2 bow section mostly there but midships and stern salvaged / spread over sea bed. Lots of fish life especially wrasse of all types, followed line to Barge with salvaged gun and vice(s) and then back. A liesurely 60 minutes with no bottom time concerns (18m).
The evening found us docked at Burray next to Andy’s boat, the Jean Elaine. A brisk walk after dinner to the other side of the barrier (beach beyond dunes) cleared the cobwebs and got us ready for a pint in the hotel bar. The imbibing continued back in the rum bar (the boat saloon).
UB116, a late German casualty of the first war, is well blown apart at 29m. The central body has recognisable shapes and features but is quite distorted in some areas. Only one pair found the remains of the conning tower (from the briefing off at 45 degrees). Alex and Will did a defined search pattern to locate it. Only problem for Alex, given Bob’s briefing about it looking like the sub from the ‘Yellow Submarine’, was the song (Beatles – only for those of a certain age !) repeating over and over in her head. There were conger, ling and octopus as well as shoals of small fish. On a very white sandy bottom it felt very bright with good vis before divers feet stirred it up a little. Everyone enjoyed this one, so good even Syd did 10 minutes deco.
Adventure was on the agenda for the afternoon. A drift down Burra Sound over the block ships. Turned out to be quite gentle on the Skye scale. Only 3 pairs were separated but that may have been deliberate. There were certainly fast and slow pockets, as well as the occasional lumps of metal. Continuing the theme, after docking at Lyness and reviewing the new museum exhibits, a walk up to Wee Fea. A thorough exploration of the observation block gave outstanding views over the whole of Scapa Flow. There is an Anchor bar with entry hidden at the back of the hotel block that we persevered and located.
Another bright and still morning dawned for an earlyish start. Horrors !!!!! The midges appeared in the calm. Everyone hid indoors until the boat got underway. Kronprinz Wilhelm, the shallowest of the battleships was our next dive. Quite dark underneath, boat is turned turtle, but lots of life on the bottom (top).
Highlight of the week for some – Tabarka. 12.00 for the tides. It has deteriorated from previous years. The gap in the middle is much bigger, the clearances have reduced with the plates dropping. On the plus side, we were on super slack, so we could explore round as well as inside. The light streaming through the holes still makes this spectacular.
So an afternoon and evening in Stromness. A nice walk round the town, then up the hill, a pre-dinner drink, tea and then a fiddle group to entertain us in the Ferry Inn.
This morning Hannah educated us on nautical matters as the ‘boutique’ cruise ship (ugly cattle) docked beside the Halton. Derricks not cranes. Posh is teak not steel caps.
Off to the Dresden again with Bob putting in the shot that should be on the stern (deep entry, shallow exit). Steve demonstrating superb leadership skills by getting Karl to lift the weight onto the deck, so he could tie it in.
Oh no. Our final dive. The Karlsruhe. Much more distressed than the other cruisers but more ‘accessible’ and at a more convenient depth (25m). A lovely dive to finish with lots of identifiable metal and life.

So we said our goodbyes to ‘5*’ Fiona and Hannah ‘banana’, our fantastic crew for the week, and to Bob, a truly great skipper and diver. Reorganising the dive plan after being blown out from Shetland and giving us the type of diving we were looking for in the best possible conditions each time.
And finally thank you to Richard for organising it all. A little frustrating at times I know. 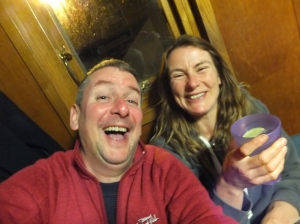 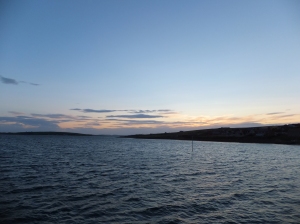 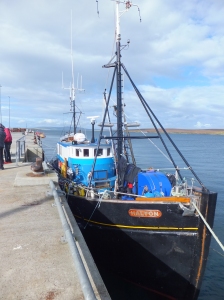 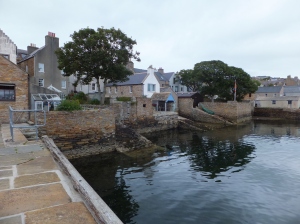